What to Know When Choosing a Hospital When Judie Burrows, an adventurous, retired teacher, broke her hip during a bicycle accident, her family trusted the doctors and the hospital. They were not worried about a routine hip surgery.

“I didn’t realize at the time that we should have worried, even though this was a routine procedure,” said her son, Steve Burrows. “We thought all hospitals were basically the same.”

Burrows, who produced the award-winning HBO documentary “Bleed Out” recounting his mother’s story, points to an option like the Leapfrog Hospital Safety Grade as how his family might have compared hospital safety. 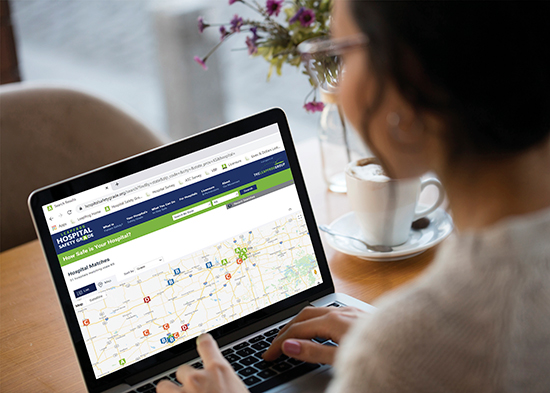 Five months later, with her first hip surgery failing, Judie Burrows fell and broke her hip again and spent eight days in the hospital in excruciating pain with no plan of care. She had a second hip surgery, despite the doctor knowing she was still on three different prescription blood thinners, and lost half the blood in her body.

After surgery, Judie Burrows slipped into a coma. For a day and a half, no one noticed.

“When my mother emerged from her coma after two weeks, her cognitive abilities were equal to that of an 8-year-old,” Steve Burrows said. “She survived, but lost her fierce independence, her home and all her life savings, which were used to pay for the injuries she suffered.”

“At first, I thought my family was just unlucky,” Steve Burrows said. “However, after the release of our HBO documentary, ‘Bleed Out,’ I received thousands of messages from people across the country who recounted their own stories of loss and suffering related to medical errors.”
Research confirms the problem is significant. A study in “The BMJ” found upward of 250,000 people in the United States die of preventable medical errors each year, equal to more than 600 people per day.

To assist people like the Burrows family, nonprofit watchdog organization The Leapfrog Group grades hospitals with an A, B, C, D or F based on measures that protect patients from preventable errors, injuries and infections.

The grades look at up to 27 measures of hospital safety, like infection rates, surgical errors and standards for intensive care unit (ICU) physician staffing.

‘Shopping’ for care is crucial

“Health care is too important not to shop for it,” said Leah Binder, president and CEO of The Leapfrog Group.

Binder suggests a safety-first research strategy that begins with the Hospital Safety Grade, the only resource entirely devoted to errors, injuries and infections, followed by research from other sources into the quality of the surgery or treatment a patient needs.

The hospital grades are free to the public, updated twice a year, independently assessed, peer-reviewed and fully transparent. People can search for hospitals in any region of the United States.

Judie Burrows passed away last year after enduring more than a decade of health struggles following her first hip surgery. The hospital and doctors never claimed any responsibility for the emotional and financial costs.

“Do not be afraid to shop like your life depends on it,” Steve Burrows said. “It does depend on it. My family found out the hard way.”

Look up grades for your local hospitals at HospitalSafetyGrade.org.

Sponsored by The Leapfrog Group