Adoptions and purchases of puppies and dogs have skyrocketed in the past year, proving once again that these furry animals are people’s best friends—especially during a pandemic. Unfortunately, the incidence of dog bite injuries to children has also risen sharply. 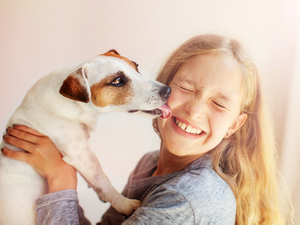 Injuries by the numbers

The consequences of dog bites for kids can be serious. Babies and toddlers are most likely to be bitten on the face and neck, while older children are often bitten on the extremities, such as the hands. The nature of a bite is often a disfiguring injury combination of laceration and crushing and may leave a severe scar. Broken bones, serious eye injuries, and muscle and nerve damage can all occur, and they account for a significant number of emergency room visits.

Know when to back off

Most dog bites are preventable. To help reduce the risk of your child being injured by a dog:

Raised hackles (the fur on the dog’s back stands up)

Tail tucked under or arched way over the dog’s back

It’s important to remember that it is not a dog's breed that determines whether it will bite, but rather the dog's individual history and behavior, as well as the circumstances and above risk factors.

Children under age 5 may not reliably recognize when a dog is about to bite, so never leave a young child near a dog without continuous adult supervision. For more information about dogs and kids, go to EugenePeds.com.

Ballet on the Green