Susan’s 7-year-old daughter, Kylie, has lots of friends. She plays soccer, swims, and sings in the choir. She likes to help her teachers and is the first one in class to raise her hand to volunteer. Even her parents’ divorce two years ago doesn’t seem to have had major repercussions: She merrily goes to her father’s house every other weekend and gets along well with her new step-siblings. To everyone who knows her, she’s the model of a well-adjusted child.

Except this: When she’s at home with Susan at night, she sticks to her like glue. “She’s afraid to go anywhere in the house alone, even though we've lived there for four years,” Susan says. Routine tasks, like taking out the trash, can become cumbersome. And bedtime rituals take hours. Susan often falls asleep on her own bed with her child after giving up on negotiations to have Kylie go to sleep in the room she shares with her sister. Sleepovers have been thus far out of the question. “Having all the lights on helps, but the fear is still there. This extends to other houses, like her grandparents’ and her dad’s as well.”

Susan is at the end of her rope. “We read two books that focus more on being afraid of the dark, not specifically about being alone in a room. They might have helped… a little. My older daughter had this same fear, but she got over it by the age of 7. Not so far with this child.”

Across town, Keri is negotiating with 4-year-old Meredith, who is close to tears. She hasn’t been willing to use the downstairs bathroom since the toilet flooded six months ago, and she still won’t, even though it has long since been repaired. So Keri waits patiently at the foot of the stairs while Meredith heads upstairs to use the bathroom in her room. They’re running late, again. Keri hopes the restaurant where they are meeting friends doesn’t have automatic flush toilets, or it’s going to be a long night.

Meanwhile, Julia’s father, Joe, has just returned home with a crying 10-year-old daughter and raw nerves after another failed bicycle outing. Although she’s agile and able, Julia refuses to ride her bike across the street. He’s walked her bike across every intersection along with his own, and he’s tired, frustrated, and concerned. “I learned to ride a two-wheeler when I was four years old,” he says. “I don’t understand why she’s so afraid.”

Many parents remember our childhood fears—everything from monsters under the bed, big dogs, and swimming, to bigger fears, such as having a parent die or being sick ourselves. But when these fears emerge in our own children and our parenting skills fail us, we don’t always know what to do.

“Some fears are easy to empathize with, but this one has been hard for me,” admits Susan. “My oldest daughter went through it too but grew out of it by age 7. Not so for this child. I’ve been taught that it’s important to validate a child’s feelings, but there are times that I’ve lost my patience and said, ‘that’s enough. Just go to bed.’ We both go to bed upset. That doesn’t make me feel like a good parent.”

It’s not just your child

Ninety percent of children between ages of 2 and 14 have one specific fear, says Megan A. Wuest, MS, LPA, who works with children and their families at the Center for Family Development and in her own private practice in Eugene, Oregon.

There are common fears specific to age groups, she says. From birth to 2 years old, loud noises, strangers, and separation from parents are the most prevalent. During the preschool years, common fears include imaginary figures, supernatural beings, the dark, noises, sleeping alone, thunder, and floods. School-age children have “more realistic” fears, Wuest says, such as physical injury, health, school performance, death or natural disasters.

“Anxiety gets in the way or distracts children from their ability to self-soothe themselves,” says Wuest. It robs them of their creativity. They tend to give up too quickly and they don’t recognize their successes. Anxious children have difficulty feeling safe even when they are safe.”

Although only about 1 in 100 children are diagnosed with anxiety disorder, it remains the most prevalent psychiatric disorder in children and adolescents under age 16. There are a number of factors that can contribute to anxiety, says Wuest, including temperament, parent-infant attachment, having a parent with a mental illness, and parenting styles.

“If parents are too laissez-faire, then the child does not have enough structure to feel secure,” Wuest says. “If, in their mind, no one is in control, then they will attempt to take over the parenting role. Because they are children, they will fail and feel inadequate and subsequently, anxious. Parents can prevent this by consistently setting limits with their children so they feel safe. Conversely, parents who are too rigid do not provide enough emotional safety for their children.”

It’s important for parents to understand that either a child’s past experiences or his or her temperament can make them overly responsive to normal human survival mechanisms. Sometimes this leads to behavior parents find extremely frustrating, such as tantrums or meltdowns. Understanding that a child cannot control these reactions may help parents to remain patient. “In children’s brains, the Amygdala sends out a distracting alarm and takes over their mind and body,” Wuest explains. “While they are experiencing this alarm, they cannot think clearly.”

In dealing with a child’s fears, Wuest says it’s first important to determine whether the child is “in their thinking mind, or has the alarm taken over?”

If they are “alarmed” then reasoning or threatening their child with consequences might only make things worse. In this case, the parents need to help their child deal not with the fear, but with the resulting reaction.

Offer calm and comfort, Wuest suggests. “Parents can become an anchor for their child by staying calm themselves. They become the external, emotional regulator for the child.” Speaking in soft, reassuring tones, and offering physical comfort such as a reassuring touch helps, she says.

Parents also want to reflect to their children that they are capable of overcoming their fears and to do things even if they are scary. For example, if a child is afraid to cross the street on her bike, practice with her the appropriate safety precautions and encourage her to try again (once she is calm), while staying close by. At the next corner, remind her of her success the last time and ask if she’d like to try it by herself. “The basic strategy,” explains Wuest, “is to make the child first feel safe, learn and practice skills to increase their feeling of calm, listen to them and correct any misconceptions they have about the situations and then gradually exposing the child to the feared stimulus until they are no longer immobilized by it. “

In the case of Meredith and the downstairs bathroom, Kerry found that a creative solution—and a lot of patience—helped. “I asked Meredith what we could to get her back in there, because it would just be too hard for her not to use that downstairs bathroom. We ended up working together on a series of drawings with captions to them that we hung up on both bathrooms, and that did the trick. It was her own solution, and I just executed, coaxed and supported her through the process. It was really kind of amazing, as it showed her own power, and the power of drawings -- what kids so understand, and the power of creativity in parenting. She still doesn't much like public automatic flush toilets, and I still need to keep my hand over the sensor to stop it, which I'm glad to do until she outgrows it. But it felt like a major victory getting her to use the downstairs bathroom again after the sewage incident.”

There are bigger fears, of course, such as death or serious illness. Often these are connected to traumas, sexual abuse, or a tragic death, Wuest says.

Know when to seek help

If a child’s fears are creating significant distress or impairment in social, academic or other important areas of the child’s life, or if parents are frustrated to the point that it is negatively impacting the parent-child relationship, then it is time to seek help, Wuest says, adding that untreated anxiety leaves children with an increased risk of developing peer relationship difficulties, academic failure, and could lead to depression or substance use.

In other words, it’s OK (and important) to ask for help. The goals of anxiety therapy described by Wuest are to increase child’s ability to self-sooth and relax; to assess and augment positive coping strategies; to help implement strategies; and to recognize successes and build on them.

After consulting with friends and with his own therapist, Joe realized the solution was to leave his own bike at home for a while and keep his bike trips with Julia short. “We started by going around the block a few times. Because I knew that each intersection was going to require coaching and perhaps walking alongside Julia until she felt confident, it was easier for me to just jog alongside her with her on her bike. We did this for over a month. But once she saw that she could handle herself just fine, she was willing to try a ride to the park—and I took my bike this time. She’s still extra careful at intersections, but I hope that will always be the case.”

Parents that are emotionally close to their children provide them with a secure base that allows the child to feel strong and then take on new challenges. “Play with them, laugh with them, delight in them,” Wuest says. “Reading to them where you can be physically close, relaxed and having fun is powerful too.

“Children internalize their self image from what they read about themselves in their parents’ faces. A child struggling with anxiety is helped when they know that they are safe, they are loved and they are capable of overcoming any obstacles that they may face." 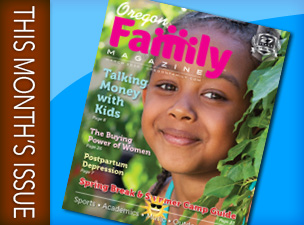